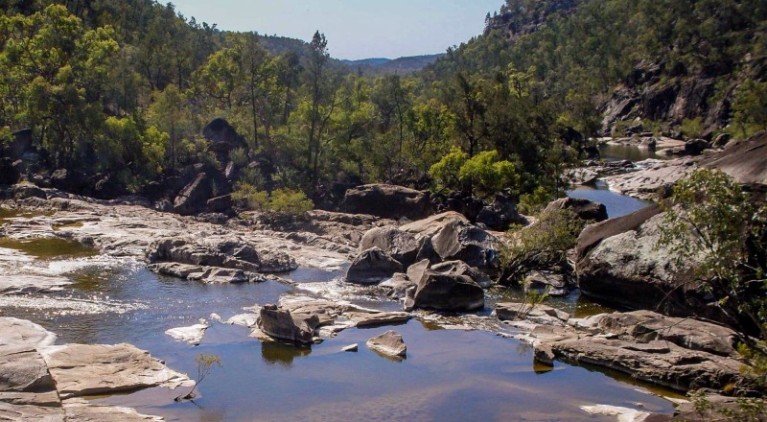 It was a turning point for my son. Up until that day, he had been nervous about jumping in and getting his head under water. Yet, for some reason, things just clicked that afternoon.

We were swimming in a river (of all things) with a group of friends. Several kids found a big rock to jump off of and were visibly having a great time. Bryce watched for a few minutes and decided he wanted to try.

I assumed he would get on the rock and change his mind once his old fears kicked in. Still, it was worth the try.

We were about twenty feet from the rock. Since Bryce cannot swim, and the water was too deep, I had to carry Bryce to the big rock -easier said than done. The river bottom was composed of slippery rocks which were both difficult to traverse and painful on bare feet.

Still, we made it to the rock. And, to my surprise, Bryce actually jumped in! Over and over and over again, Bryce couldn’t get enough of his new found adventure.

Then, it happened. On about the twelfth jump, Bryce landed in my arms -only this time, I lost my footing on the slippery rocks. Both of us went under. I struggled to regain my footing and get Bryce’s head back abover water. What would have ordinarily been a simple task was made much more difficult by the slippery riverbed.

Once we finally became stabilized, Bryce took a big breath and looked at me with his innocent eyes. The look was akin to the victim of betrayal. In my mind, I imagined him thinking, “Dad, I trusted you -I depended upon you. Why did you let me fall?” Ouch -as a parent, that hurts.

I did the only thing I knew to do. I lifted Bryce up and set him on the jumping rock. It was above water and dry. He could get stable footing there and be safe.

It reminded me of Psalm 40:2 where David proclaims, “He drew me up from the pit of destruction, out of the miry bog, and set my feet upon a rock, making my steps secure.”

As difficult as it is to admit as a parent, I am not the most stable “rock” for my son to stand on. Christ is. That has two implications:

My son is growing up too fast. This break-through day of jumping in the river is a reminder of all the “breakthroughs” coming our way in the near future. As a parent, I want to help my son avoid placing his trust on the slippery rocks in the river of life and come to the faith by which He can stand on the solid Rock of Jesus.

And, just like in the river that day, my only hope for lifting my son up to the Rock, is finding my stability on the same Rock -Jesus Christ.

Subscribe to my blog and recieve email updates each month.

I am the Executive Director of DiscipleGuide Church Resources, a ministry of the Baptist Missionary Association of America.